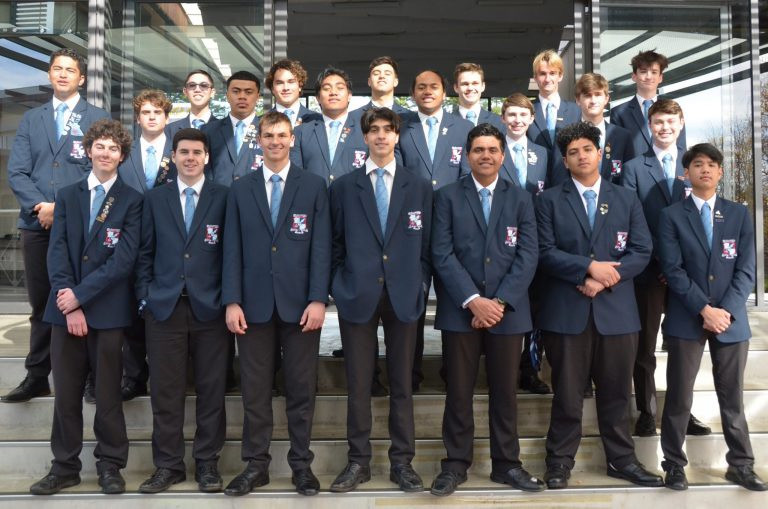 he Arts Tie is an acknowledgment of the dedication and talent of senior students representing our College in Arts-related areas. These students have made a significant contribution to one or more of the major Arts in the College: Visual Arts, Music, Drama, Debating, Public Speaking, Media, Creative Writing or Cultural groups. Recipients have consistently performed at a high level in their fields of artistic endeavour within the school, over several years. Additionally, some recipients have achieved a success that is recognised within the Auckland region and/or at a national/international level.

Congratulations to this year’s recipients:

Peter O’Sullivan – Peter has been the concertmaster of SHC Chamber Orchestra and Symphony Orchestra since 2017. He is most known for his ability as a violinist. Peter has also represented the College in Debating and in Chinese Speech Competitions.

Kieran Murphy – Kieran is a Clarinetist who is a member of the Symphony Orchestra and Premier Concert Band. He has competed in the full gamut of music competitions: the KBB, Walter Kirby and, beyond school in the Auckland Philharmonic Orchestra.

Dylan Shore – Dylan has been a member of Dunstan’s Band. He is a part of Black White and Brindle. The band were due to star in this year’s production of Buddy Holly that had to be cancelled because of Covid-19.

Nikau van der Coer – Nikau is the lead singer of the band Black White and Brindle who have worked their way through Rockquest and were in the top 5 in the Auckland Stand Up / Stand Out competition.

Joshua Curtis – Joshua has competed at the highest levels as a Debater. As well as being an orator he is an accomplished violinist, pianist who sings in the choir.

Josh McNamara – Josh heads our AV team and therefore has been instrumental in all our Arts events. He was part of the team that made The Cultural Group Performance Livestream possible and controlled the lighting desk for the Caucasian Chalk Circle.

Josiah Leaupepetele – Josiah has been a member of the Senior Choir since 2019 and is a respected vocalist. He has been in school productions and has his own podcast.

John Alo – John has debated at the highest level. He is a public speaker of some renown and is also an accomplished musician.

Thomas Partington – Thomas has debated to the highest level. He is also the lead guitarist of the group Black White and Brindle. These guys has their recordings have feature on Maori television.

Jadin Kingi – Jadin is a respected leader in the Kapa Haka group. He has impressed as an Orator and is adept with the Putatara.

Harry Wigley – Harry has been a member of the Premier Concert Band since Year 9. He has participated in two National Band Festivals, KBB festival and was in Blood Brothers in 2018.

Damon Kane – Damon has been a member of the Premier Concert Band, Orchestra, and Jazz Combo. He’s won Legends, been a part of School productions and is also the drummer of the group, Black White and Brindle.

Julio Romero – Julio is a Bassist who has laid down the beat for the Jazz band and the production. He has also debated and appeared in speech contests.

James Witana – James is a long time member and leader of the Kapa Haka group. As well as passing his skills on to younger members of the group, he has impressed as an Orator.

Calem Todd – Calem is a long time member and leader of the Kapa Haka group. He is also an accomplished Orator placing in both the Manu Korero and Race Unity speech competition. The first is a contest in Te Reo, and the second, in English.

Setefano Selui – Setefano is a long-time member and leader of the Tongan Group. He has been responsible for assisting junior members understand the self-discipline and rigorous practice that is required to produce a superb performance.

Ben Jolly – Ben is a Dramatist. He was a part of the Caucasian Chalk Circle production in 2019 and was cast and rehearsing for this year’s Buddy Holly before it was cancelled due to Covid-19.

Sionekau Lokeni – Sione is a committed member of the Tongan Group. He was this year’s Vahenga. As such, he played a distinctive role which demonstrated the elevated place he held in the group.

Jack Higgins – Jack is a guitarist and singer who has performed extensively around town and at school. He has been a member of the various drama productions.

Richard Ieremia – Richard is a long-term member of the Samoan group whose leadership skills were recognised when he was appointed Ai’uli in 2019. Richard’s skills in Oratory have also seen him be called upon to speak for the group in contests and on television.

Kobe Anitelea – Kobe is a long-serving member of the Samoan Group. Like Richard, he was an Ai’uli for the group and was involved in the choreography and costume design.